The Daily 202 Live: Q&A with Gingrich on how Trump will change Washington

I spoke with Newt Gingrich at The Washington Post last Friday for the latest installment of The Daily 202’s live interview series. The former speaker of the House, who had huddled with Donald J. Trump the night before at Trump Tower, spoke candidly about the president-elect’s leadership style, the three power centers that will exist in his White House and why he’d welcome a million federal workers taking to the streets.

Gingrich was a runner-up to be Trump’s vice president this summer, but he will not take a formal role in the new government. The 73-year-old predicted that Trump will create a new governing coalition with certain Hispanic and African-Americans but without some members of the House Freedom Caucus.

Below is a transcript of our hour-long conversation, edited slightly for length and readability:

Hohmann: You’re one of the few people who knows Trump really well and knows Washington really well. Looking ahead, what’s your prediction for how Trump changes Washington, and how Washington changes Trump?

Gingrich: Probably some time in February, the cabinet that he’s assembling … will get together for a meeting and realize that Washington does not accept the election. And whether it’s the bureaucracy, or it’s the news media, or, it’s the lobbying community, or it’s some parts of the Republican Party, all of them are committed to a different future than the one that Trump wants.

At that point, they’ll have two choices. They’ll either do what (Arnold) Schwarzenegger did in California, after he lost his referendum (in 2005), and decide, you know, ‘Okay. I’ve got to accommodate the system that’s already here.’ Or, because they are such a high-powered collection of people, who are so used to winning, they’ll say, ‘Okay, we’ve got to double, or triple, or quadruple our energy level, and break through.’ And at that point, you will know just how historic Trump’s going to be.

Hohmann: You really think we’ll know that in the first 60 to 90 days?

Gingrich: Oh, yeah. Because the problems they have to solve will all compound, almost immediately. The biggest of which is the bureaucracy. If you look at the Veterans Administration, which is sort of the archetype of disaster, you can’t fix it unless you change the civil service laws.

You can’t change the civil service laws within the normal framework of Washington. So you have to either do what Scott Walker did and break out of the normal framework – which in his case led to 100,000 people demonstrating, a six-month occupation of the Capitol, and death threats against both he and his wife – or you say, ‘Well, yeah, we’ll fix it as well as we can without really making anybody unhappy.’” 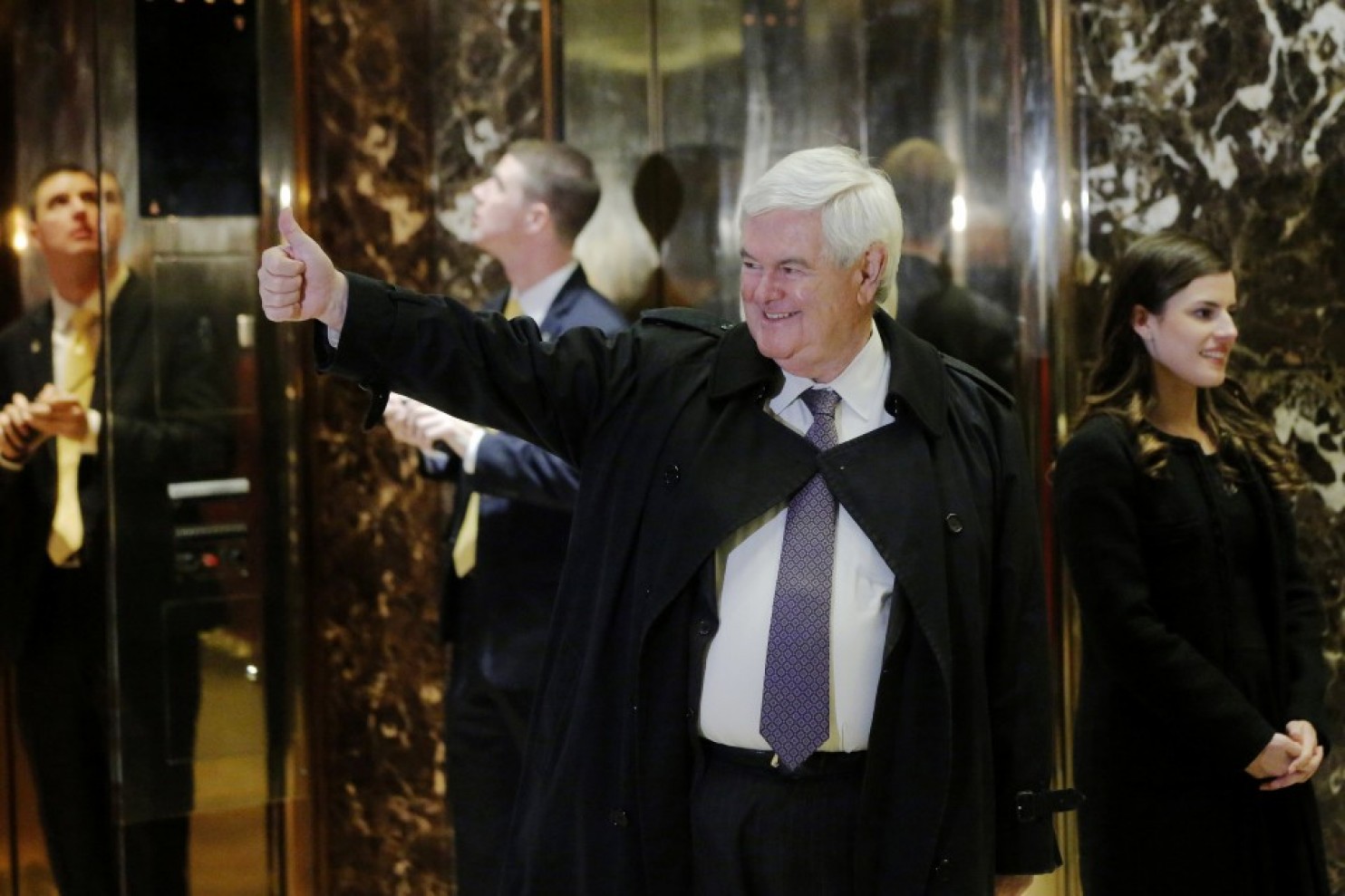 Gingrich arrives for a meeting with Trump at Trump Tower. (Lucas Jackson/Reuters)

Hohmann: Do you feel like he’s willing to be contentious enough to break that logjam? In some ways, he is also pretty conflict-averse.

Gingrich: At an interpersonal level, he’s conflict-averse, partly because you can’t run a huge empire by running around and pissing everybody off. When you leave, they’ve got to run the golf course, or the hotel or whatever. So if they really get mad at you, they just quit doing it. He thinks that schmoozing generally works better than attacking.

[Trump’s nominee to be secretary of defense] had this line in Iraq: ‘The Marines can be your best friend or your worst enemy, and you get to pick.’ Well, I think Trump and Mattis get along really well. I think they have very similar attitudes about that.”

Hohmann: Let’s take a step back. I remember being in Iowa in January 2015. Trump made his first big foray to the state that weekend. You and Callista had breakfast with him at the Des Moines Marriott, and he asked you about what it was like to run in 2012.

Gingrich: We’ve known him from his golf club, and from other things over the years. We once did a West Palm Beach Zoo fundraiser at Mar-A-Lago with him. He sits down, and for 45 minutes, he asked really intelligent questions about, you know, ‘What did you experience? What was it like? What should I worry about? Etcetera. Etcetera.’ And finally, he says at the very end, ‘All right. Bottom line. Let’s say I want to really test this out through South Carolina. What do you think that would cost?’ And I looked at him for a minute, and I said, ‘Well, given your name ID, given the airplane, given all the assets … I think you could get through South Carolina for somewhere between $70 million or $80 million.’

You have to have a national campaign. You can’t pick one or two places to go, because then you don’t look like a real candidate.’ And he looked at the two of us, and then we went, $70 or $80 million? That would be a yacht. This would be a lot more fun than a yacht!’ And I thought, ‘He is going to go!’ I mean, I didn’t think at the moment he was going to win. I just thought, ‘He’s going to go.’ I didn’t really begin to sense Trump breaking loose until the Fox debate in August. 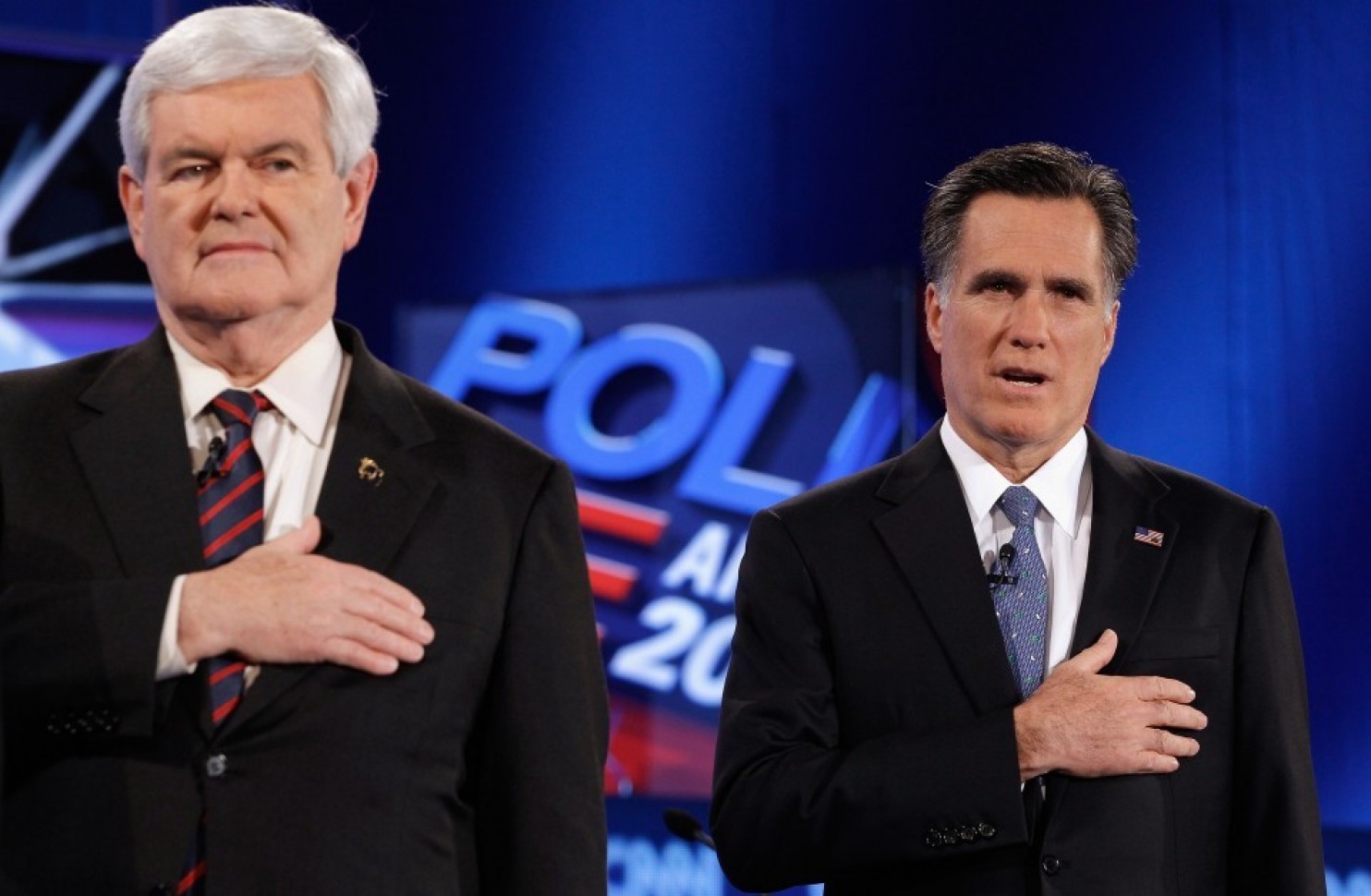 Newt Gingrich and Mitt Romney pause for the National Anthem before their January 2012 debate in Jacksonville, Florida. (Chip Somodevilla/Getty Images)

Hohmann: Why could Trump win the nomination in 2016 when you could not in 2012? What was different?

Gingrich: Well, because Trump combined my ability as a debater with (Mitt) Romney’s ability to have money. … If I’d had Romney’s money, I would have crushed Romney. … Look, he outspent me by some amazing number in Florida. Most of it, by the way, was lies. … I was one of Reagan’s closest allies. So Romney runs a ‘Newt was against Reagan’ ad. For those of you who are not quite getting the message, I will never forgive Romney for the depth of dishonesty in his campaign.

Hohmann: You mention Reagan. Let’s go back to 1980. You were here as a freshman congressman, part of the Reagan revolution. How does this period right now, after the election and before the inauguration in 2016, compare to the feeling in 1980?

Gingrich: Oh, it’s totally different. We were the opposition. We’d been through