Forget China, America is the biggest warmonger by far

Since 2001, the US ‘war on terror’ has killed, injured and displaced millions across 24 countries, while America’s defence spending is nearly 40 per cent of the global total. In contrast, China has waged one foreign war in the past 50 years 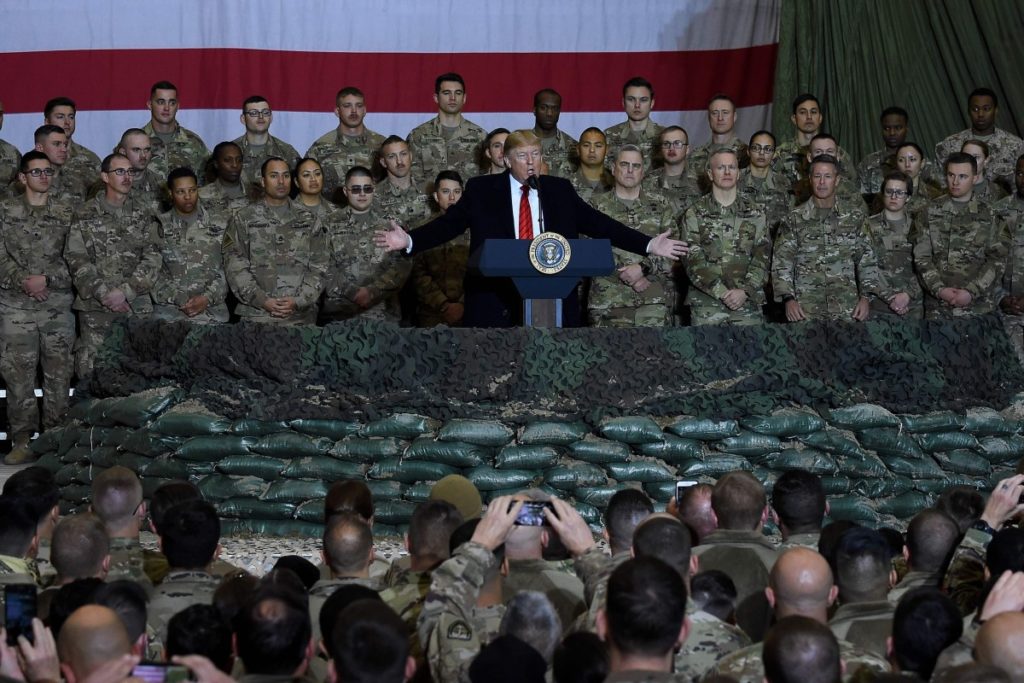 US President Donald Trump rallies the troops during a surprise Thanksgiving visit at Bagram Air Field in Afghanistan on November 28, 2019. Photo: AFP

Am I becoming paranoid, or is there an upswelling of war talk? The rediscovery of the Thucydides trap, and US Secretary of State Mike Pompeo’s Manichaean campaign to quash China as a modern-day evil empire has brought to centre-stage the idea that Beijing is set on military expansion – into the South China Sea, recovering Taiwan, and even crossing swords with India on its Himalayan border. Then remember in March how Donald Trump called himself a “wartime president” in fighting the pandemic? Remember how US military and intelligence communities have emerged from the shadows to describe Chinese national security threats emerging from every nook and cranny – whether it is Huawei and its 5G leadership or gay dating site Grindr supposedly tracking gays in the military susceptible to blackmail.

Thoughts about war converged last week with the publication of “The Costs of War”, a sobering study from Brown University’s Watson Institute for International and Public Affairs, led by Professor David Vine from the American University in Washington, and a taster for his forthcoming book The United States of War: A Global History of America’s Endless Conflicts, from Columbus to the Islamic State. The report calculates that the US “‘war on terror’” since the September 11 attacks has cost not only millions of lives and injuries, but also forcibly displaced at least 37 million people in Afghanistan, Iraq, Pakistan, Yemen, Somalia, the Philippines, Libya and Syria: “The US military has waged war continuously for almost two decades,” it said.

“US forces have fought in wars or participated in other combat operations in at least 24 countries. The destruction inflicted by warfare in these countries has been incalculable for civilians and combatants, for US military personnel and their family members, and for entire societies.”

But Vine admits: “Numbers quickly can become numbing … Most people (ourselves included) have great difficulty comprehending the meaning and effects of displacement.” He talks of torn-apart neighbourhoods, communities and societies, and a “mosaic patchwork” of mixed communities destroyed and replaced by religiously homogeneous “ethno sectarian” enclaves.

But, most of all, the report is a story of the US – not China – as a serial warmonger. In contrast, China has in the past 50 years fought only one foreign war – in 1979 against Vietnam. Former president Jimmy Carter noted last year that the US was “the most warlike nation in the history of the world”, at peace for only 16 years of its history.

Vine calculates that US conflicts since 2001 have cost US$6.4 trillion, peaking in 2008 during the Iraq War, and in 2011 in Afghanistan. The Institute for Economics and Peace puts the global cost of war at US$14.76 trillion in 2017 – about 12.4 per cent of the global economy. Whatever Pompeo and his colleagues say about China’s warmongering ambitions, it is again the US that leads the world by far in defence spending. Of the global total of US$1.92 trillion last year, the US accounted for 38 per cent (about US$732 billion), with the next biggest spenders – China, India, Russia and Saudi Arabia – spending just US$459 billion combined.

Are Xi Jinping’s China and Donald Trump’s US destined for armed conflict?
Recall former presidential hopeful Elizabeth Warren in The Atlantic in January: “These conflicts have cost trillions of dollars needed for urgent priorities here at home, created a drag on our economy, contributed to the decay of our democratic culture and institutions, and paved the way for Trump’s ugly divisiveness.” Yet America’s unmatched role as a warmonger goes largely unnoticed at home mainly because the conflicts are being waged out of sight and mind, and because modern technologies enable US forces to wage war without putting huge numbers of US soldiers in the line of fire. The Pew Research Centre reports that, despite the international collapse in trust in Trump as a leader, the US is still largely respected as an ally, and not perceived as a threat – in contrast with China, which few countries regard as an ally, and many more as a threat. However, recent troubling developments may be undermining this apathy. Civil unrest linked with the Black Lives Matter movement across more than 2,000 US towns and cities in recent months has brought troops onto US streets on an unprecedented scale.
Unrest spreads across the US fuelled by outrage over police killing of George Floyd
They have also brought alarming numbers of conservative, armed vigilante groups onto the streets in defence of “law and order”. At one point in June, more than 17,000 National Guard had been called out in 23 states and in Washington. Equally alarming, the White House has talked of sending troops to prevent conflict at polling booths during the November presidential elections. There is even talk of calling out troops in case of a disputed result – either to protect Trump’s place in the White House or to escort him from the premises.

With such alarming conflict erupting inside the US, it seems bizarre to be pointing fingers at China and its so called ambition to unleash hegemonic power across Asia. The more hot-headed Sinophobes in Washington might learn from Commodore Oliver Perry at the Battle of Lake Erie in 1813, who said, “We have met the enemy, and they are ours.” This was later paraphrased in a 1972 syndicated comic strip Pogo by cartoonist Walt Kelly, who wrote: “We have met the enemy, and he is us”. Today, it is no joke. If hot war is indeed an existential threat, then there is likely to be only one source – and it is not China.

David Dodwell researches and writes about global, regional and Hong Kong challenges from a Hong Kong point of view